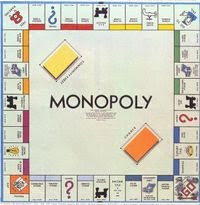 Do you like games? If so, what kind -- board games, video games, PC games, hand-held games, online games, mind games? I guess there are a lot to choose from. I grew up in the 70s and board games were really popular. I used to spend hours playing games with my friends. Sometimes we'd stretch games out over several days, like Monopoly. Some of my favorites included Hi-Ho Cherry-O, Don't Break The Ice, Mousetrap, Monopoly, Clue, Headache, Ker-Plunk, etc. I also liked the basic stuff like checkers, chess, dominoes, pick-up sticks, marbles, and card games. As I got older I was more into Scrabble, Boggle, Trivial Pursuit, and Pictionary. I try to keep up with the new board games that come out, especially for the boys. I think board games might be a dying breed in this age of modern technology, but I hope they stick around for awhile longer.
We have a lot of board games. The boys play them quite a bit, but it's been awhile since I played any. I like them, but just never make the time for them. I think I need to do that more. The boys & I play some games during school, including some trivia games for Bible lessons. Those are always fun. And I make themed BINGO games for different seasons and holidays, which is fun too. I've never done that Family Game Night thing that became popular awhile back, but it sounds fun. I do keep some games in our travel trailer, including a big set of card games for the boys. One of my favorite games that we have is an electronic version of Star Wars Trivial Pursuit. Unless you really know a lot about Star Wars, it can be pretty hard. We also have the M*A*S*H Trivia game, which is really fun as well.
As for video games -- those just aren't my thing. My kids love them. The boys have a PlayStation 2 that they like. They also have the little hand-held PSP unit, which is in use a lot too. I don't flip out over that because they don't play them all the time. The girls like games too, but play them mostly on their computers. Nichelle really likes SIMS and Nicole has a variety of games she plays from time to time. Rick's really into war games on the PC and sometimes plays them online with people all around the world. I never got into video games like my family. I do have a couple of hand-held games that I play. One is poker and the other is solitaire. I'm pretty addicted to that last one if it is within reach. I'll even play that one on my iPod.
I know there are a lot of games online and on Facebook. A lot of my friends are really into Mafia Wars, Bejeweled, and Farm Town. I haven't tried any of those yet. My favorite there is with the 101 Items. It started off as collecting eggs, but they've added butterflies, sea creatures, stamps, and even puzzle pieces. I'm really into this one and it eats up a huge amount of time. I don't know why I'm so fascinated with it. It's not like I get a prize or even a score. Must be the collector in me. At least it's one collection I don't have to dust!
So, how about you -- what type of games do you like?
Posted by Rena Jones at 9:42 AM