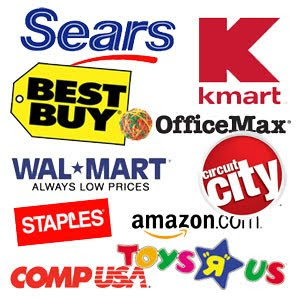 Today is Black Friday and I'm sure many of you are waiting in long lines as I type. Traditionally, this is the biggest shopping day of the year. I've only gone shopping on Black Friday a few times. Once Nichelle and I got up early and gave it a whirl just for fun. For us, it wasn't so much about the deals, but to watch the people. It was crazy. In one store, the toy aisle was so crowded that I couldn't even get in there. I remember one lady pushing a cart with about ten dolls in it, all the same kind. Either she had a big family who have no individual personality, or she was planning on selling them for a lot more. I figured the latter was the case. We just didn't understand how some people would stand in line for so long to get a free Hot Wheels car -- weird.
The original term Black Friday dates back to a big stock market crash in 1869. It later became the big shopping day after the start of the Macy's Thanksgiving Day Parade in 1924. However, it wasn't actually called Black Friday until 1966. That term was first used in Philadelphia to refer to the heavy traffic that day. Recently, merchants have used the term Black Friday to refer to being in the red and taking a loss, to going over to the black and making a profit. Electronics and toys are the most common sales items.
Last year was crazy when one Walmart employee was stampeded to death as he tried to open the door. Two other people got into an argument at Toys R Us and were fatally shot. Other people have waited in lines for hours, gotten pushed around, and in fights. Maybe I'm just a scrooge, but that doesn't sound like fun to me. I know people get some good deals and that's great. One year I went shopping on Black Friday in the evening after the crowds went home. Ironically, I saw a lot of things that were still available for the same price. I guess it's just not my thing. I would prefer to spend a few dollars more or take my time finding someone a perfect gift that's suited just for them, rather than buy them a hand mixer because it was five bucks.
Black Friday has definitely become a media event and it will be all over the news today. They'll report how big or small the crowds are, what was on sale, and what crazy things people end up doing. If you ever wanted to be on television, you might have a chance today. One thing that has always cracked me up are the pictures and video footage of people and what they've bought. So much for surprises if that's your family member being shown with Mr. Potato Head! It will be interesting to see how many people are out shopping and actually buying stuff, especially in this economy with so many people out of jobs. I, for one, won't be daring the stores today. I'd rather sit here in my warm bed next to my kitty, sipping my Pumpkin Spice coffee, while listening to the rain hit the deck. If you're brave enough to face the crowds today, I hope you find lots of great bargains. Happy shopping!
Posted by Rena Jones at 6:40 AM