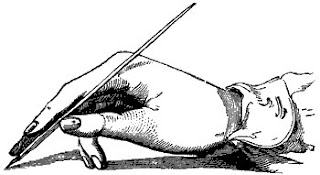 Last night I was thinking about some of my favorite authors when I was growing up. I loved to read and got an incredible amount of satisfaction from finishing a chapter book. Some of my favorite authors were Laura Ingalls Wilder, E.B. White, Beverly Cleary, and Judy Blume. Those are all chapter book authors, but I loved picture books too, especially Dr. Seuss. I never sat down as a kid and thought, "I want to be a writer!" This is something I ventured into as an adult, about 6 years ago after visiting Glacier National Park. I saw the mountain goats there and they were my inspiration to write my first story.
So, if I think about it, my so-called writing genre would be picture books. I have one published book with 6 more to come out over the next year or so. Two of those books are follow-ups to my first book, A New Job for Dilly. The Critter Books became a series simply because they were too long, so we stretched them into 3 books. The Marshmallow Man is on his own -- and come to think about it, this might be my most controversial book to date. I have lots of other manuscripts, but many of those I'd like to go back and sort through and see what changes they need and which ones to scrap.
I have written one middle grade novel, but haven't seriously submitted it. I'd love to get it published, but am not sure if it has what it takes to make it in this world. I say that because the story is simple. It's a shorter novel, only 11,400 words, so it's not nearly as long as most MG books. I kept it short on purpose because I wanted it to attract reluctant readers. I remember how I felt after finishing a book as a kid, and that was what I was going for when I wrote this story. However, it's a tame story. There's no violence, no sex, no paranormal activity, no destruction. I have nothing against those types of stories, but that's just not what mine contains. That's why I wonder if it has what it takes to make it in the world.
Which brings me to a question -- as a writer, what genre do you want to be known for? For example, Tim Burton and Neil Gaiman are known for their darker, rather goth styles. Ingalls was known for her adventurous style. Seuss was known for his rhymes, unusual words, and imaginative characters. Blume was known for her controversial (at the time) topics. E.B. White was able to use something as simple as animals and take you right into his stories, making them feel as real as the pages you were turning. There are plenty of other examples, such as authors who specialize in crude stories, like Walter, the Farting Dog and The Dumb Bunnies. Those are fine and funny to read, but they're not my thing to try to write. Then there are the J.K. Rowlings and Stephanie Meyers of the world. I think all authors are amazing, whether or not I read their books. Just the fact that they sat down long enough to write the entire story is a huge feat in itself, more or less get it published. The only ones I don't have a lot of respect for are celebrities, who can write anything and get it published. That doesn't impress me.
I don't know where I fit in. I write picture books -- yes, but I don't know if I have a specific writing style yet. Maybe that will be more obvious once my other books are out. I suppose, if anything, I'd like to be known for wholesome (for lack of a better word) picture books. I'm not out to scare anyone, to shock anyone, or say something completely bizarre. There's enough of that out there. I'd love to write books where kids say over and over, "Read this one again, Mommy!" I guess I'm just old-fashioned and trying to hang onto some imaginary string of my childhood where things were simple, innocent, and honest. However, that might be too ordinary or too boring (yes, that's me!) for today. We live in strange times, so this might come back to slap me in the face. I guess only time will tell ...
Posted by Rena Jones at 8:37 AM