Damn, what a night. 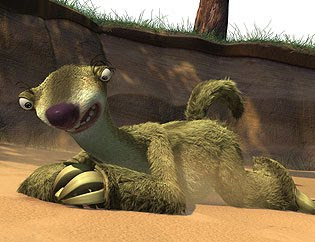 Ever have one of those nights with one crazy dream after another? I had a dream about a man wearing a ridiculous looking dinosaur costume and then I woke up laughing. A bit later I dreamt about the same man wearing a Jack Skeleton outfit, who was passing out Nightmare Before Christmas Halloween treats. Then I woke myself up whimpering because I was dreaming about a baby in a carseat that I couldn't reach who was either sick or sad. But it wasn't really a baby. It was an egg. An egg in a carseat. With a sad face. Rick's alarm went off at 6am and instead of shutting it off right away, he let it go. He has a CD player alarm and gets woken up by the Red Hot Chili Peppers singing "Snow (Hey Oh)" every morning. I LOVE this song, and it always bums me out when he hits snooze and shuts it off. This morning, however, he must have been super tired and let the song play almost all the way through. So, I get up around 7am and get a cup of coffee and come back to bed. I drink the whole cup and fall asleep again. What do you think I dreamt of then? Chicken! Rick and I were at a KFC and he was being a total ass to the guy behind the counter. He was ragging on the worker about wanting a politically correct piece of chicken and telling him how and where to cut it. He was being a real jerk. Sad thing was that the guy behind the counter was totally taking him serious and trying to be as nice as he could. When it was my turn to order my meal, I asked if they had halibut, but he said no, so I got plain fish. Yeah, fish at KFC!
Okaaaaaaaaaaaaaaay ... so what does this mean?
Actually, there is a logical explanation for most of this, I think. We watched Ice Age: Dawn of the Dinosaurs last night with the boys. In the movie there were dinosaurs (the man in the costume), there were dino skeletons (Jack), there were baby eggs with faces (just like the one in the carseat), there was snow (Red Hot Chili Peppers), and there was a chicken that the big T-Rex tried to get her babies to eat (KFC). The politically correct comments are probably from me reading the news lately. But damn, what a weird group of dreams! Maybe it was those green olives stuffed with jalapenos that I ate while watching the movie. The movie is hilarious, by the way. If you get a chance to watch it, do so, because it's just as funny as the first two films. I was going to post a clip, but they've all been disabled on You Tube, so you have to go there to watch them. As with the other films, Scrat the squirrel is a highlight of the movie. Click here to see what I mean.
Posted by Rena Jones at 8:28 AM