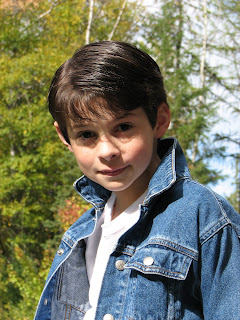 Today is Nathan's 10th birthday. It's hard to believe it's been that long already. He's grown up so fast. He's my little brainiac of the family. If you have a question about any kind of bird in the world, he can probably answer. If he can't, he has all the books to find the answer. He knows the names of more actors and producers than I do. He's the one who will sit looking through his world history book for an hour after his lesson is over. He certainly didn't get his smarts from me!
Nathan had a rough start in life and was hospitalized for 6 days after he was born. There was meconium present at his birth and the doctors believed he had inhaled some into his lungs. He was on oxygen, under the lights, got poked with needles day in and day out. It was awful. I was officially discharged, but decided to stay with him. Turned out, I came down with a high fever and infection, so I was readmitted. It was a crazy time for us both.
We're having a simple party for Nathan tonight. He's a little disappointed that Nichelle and Nicole won't be here, but he understands. He's looking forward to them coming home soon. I'm sure I'll take some pictures, so maybe I'll post some of him with his gifts later on.
Happy 10th Birthday, Nathan!
Posted by Rena Jones at 9:44 AM