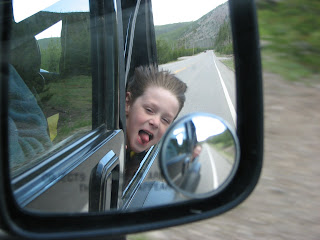 Are you traveling this summer? If you're like most people, you'll probably have a camera with you and take some pictures along the way. I usually have my camera with me at all times. The few times I don't is always when I see something cool -- always! I use a Canon PowerShot S3IS, so it's not a huge thing to carry around. I'd rather use Rick's Canon EOS with his mega-lens, but that's a whole other story. In fact, my little camera has better pixels than his, but it's that zoom that I love. The thing must weigh 8 pounds, so it's not easy to carry in my purse.
I got an email from Photojojo this morning that has some fun ideas on taking pictures while traveling. Check out their link because they also include fun traveling games. Many people do games while traveling in their car, like searching for all 50 license plates or finding the letters A through Z on road signs. Photojojo adds a twist on these games and has you taking pictures of them instead. That certainly would take care of the age old problem of the kids fighting about whether one of them saw the letter X or Z -- with digital cameras, they now have proof! The article has some fun ideas on how to make your pictures interesting and fun. As most of you know, I'm notorious for taking silly pictures. You've seen the boy's GI Joe dolls playing in the lake or posing in Yellowstone. You've also seen the boys at the Nose Pickin' Tree and stuff like that. As much as I like trying to get that perfect photograph, it's the silly pictures that my family likes the most. Typical. In addition to the things Photojojo suggests, here are some other ideas for taking pictures while you're on the road ...
Posted by Rena Jones at 8:27 AM