The aliens have landed! 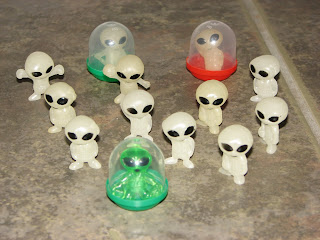 It's a good thing they're only a quarter inch high or we'd be in real trouble. These little aliens are the newest fad for my boys. They get them from those candy vending machines you find at grocery stores. Give the boys a quarter, and they're happy campers. They want to make an alien movie when Nichelle gets home, so they're collecting them for that. Ironically, they fit perfectly in GI Joe's hands too, so he can often be seen riding in his Jeep holding a fistful of aliens. Makes perfect sense to me.
Now for something that doesn't make sense ...
The other day I received an email from a friend (thanks, Gale!) with an article about Neil Armstrong being removed from school textbooks. Huh? Click here to read the article. The Texas State Board of Education is holding meetings to discuss whether Neil Armstrong should be removed from current school books. Again, I say ... huh? Apparently, they don't count Mr. Armstrong as a true scientist. Okay, now I'm going to yell ... HUH? According to this article, Neil Armstrong "received an aeronautical engineering from Purdue University, and a Master of Science degree in aerospace engineering from the University of Southern California. He later was a professor of aerospace engineering at the University of Cincinnati."
So please, somebody tell me -- what exactly does one have to accomplish to be labeled a REAL SCIENTIST? Apparently, walking on the moon doesn't count. I'm beginning to think maybe the aliens are running the school boards. Our kid's books can feature famous American icons like Michael Jackson and Marilyn Monroe, but they can't include a man who walked on the moon? Oh sure, everyone does that. What's wrong with people?
Posted by Rena Jones at 9:15 AM