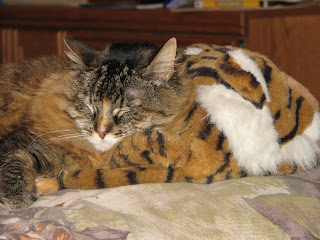 So little time! Why is it that a story idea comes to me on the busiest weekend ever? Does that happen to you? As soon as you have something to do -- BAM -- here's a story idea to stress over! Fortunately, mine isn't as hard as it would be starting from scratch. What I want to do is take something I've already written and change it from an early reader to a picture book. That can't be too hard, right? I can hear you all laughing from here.
Thanks for all your nice comments and wishes for Nicole. I'm happy to say she made it to Pensacola Christian College in Florida. She had 3 different flights to get there, but it went smoothly. We wished we could have gone with her, but between money and time off, it didn't happen. Rick had taken time off so the boys could visit with their grandparents this summer in California. With their age and poor health, I think that was a good move. I also got to see my mom, probably for the last time. Nicole understood and I'm sure she's glad we're not standing around like dorky parents anyway. She'd never talk to me again if I asked if she had enough underwear in front of her roomates. It's probably a good thing we're not there.
However, she is getting settled in. Her dorm room sleeps four, but I believe there are only three girls in it this year. The other two were there last year, so they've been really helpful to Nicole. One took her to dinner last night and helped her get her ID card, so that was really sweet. It's definitely strange not having the girls here. None of those baby books I read when I was pregnant prepared me for this. We went to the grocery store today and it was weird not buying stuff for the girls.
I'm starting school with the boys on Tuesday, so I have between now and then to get the office finished. It's starting to shape up and when it's done I'll snap a few pictures to show you. I need to do that before we start school because it gets pretty cluttered throughout the year. I've decided what book chart I'm making and it was none of the previous ideas I had. I'll post a picture when I make it, so I'll leave you hanging until then. Like I said, it's none of the ideas I had before. You'll laugh when you see it, especially those of you who know me well. Anyway, so I have my work cut out for me this weekend, and of course, have a story idea I want to start working on. I wish I could be like Belle in this picture -- just curl up on my tiger slipper and not have a worry in the world. Have a great Labor Day weekend, everyone.
Posted by Rena Jones at 4:32 PM