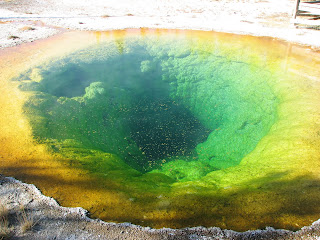 We arrived home today around 5pm. I'm happy to say the cats did really well. Normally, we don't take them on camping trips, but since the girls are gone I decided to take them with us. They did good and slept most of the time in the car. We only had one day in Yellowstone, but that was okay for such a spur-of-the-moment trip. Sad thing is, we were limited to one area because of some road closures. One road is being closed for repairs and the other road was closed because of the fire. If you're not familiar with the roads in Yellowstone, it's basically an 8-shaped loop that goes through the park. There are north, south, east, and west entrances, and then all those connect to the loop roads. We came in the West Entrance and had planned on going to the northern end of the park, but the main road was being worked on. Then we tried to go south and go around the lake, but there's a big fire burning at West Thumb, so they had just shut down the road. So basically, we were stuck seeing the Old Faithful area. I say stuck, but I don't mean it in a bad way. Generally, that's the main area of the park for most visitors who want to see the geysers.
However, we had just been there in July, so we hoped to go someplace new. We just made the best of it and saw things we didn't see back then. We're only 7-hours away, so I felt bad for people from out of state who could only see one area of the park. That had to be disappointing. But fire is fire and you can't get around that sometimes. Apparently the fire was started by lightening on September 13th, but it wasn't reported until the 23rd. It's amazing how those things can burn and no one know about them. They expected the road to be open on Tuesday. Plus, they are expecting snow on Wednesday, so that will really help the firefighting efforts. As disappointing as it was to be limited to the one area, it was still cool to be inside the park with a major fire burning. It's been 21 years since the big Yellowstone fire of 1988 and the forest is doing well. It's incredible to see all the new growth.
So anyway, we saw things we haven't seen in awhile, so that was cool. The most amazing part of the day was the weather. It was GORGEOUS! It was around 64 degrees, so it was perfect to be out walking -- not too hot and not too cold. There wasn't a cloud in the sky! We have never been there when there hasn't been some clouds, rain, snow, or something. Totally blue skies all day long. The only so-called cloud we saw was by West Thumb, which was the cloud of smoke. We only saw that when we drove closer to see where the fire was. From the Old Faithful area, all you could see was blue skies. It was beautiful! We also saw some things we had never seen before like Beehive Geyser going off as well as Grand Geyser. We lucked out and saw both of those, which are spectacular. And we took a hike up to Morning Glory pool, which is what is pictured at the top of this page. We hadn't been up that way since the girls were little. Last time we were in this area, there were huge thunderstorms rolling in, so we didn't get to walk around much. So, even though we were restricted, we still saw some great stuff.
I'm in the process of making a slideshow to include with this blog post. We didn't get to see a whole lot of animals this time, but that's okay. We did see some bison, elk, eagles, osprey, deer, fish, and birds. It is the rut in Yellowstone, so it was cool to see the bulls with their harems. They sound so cool when they bugle. I had to take a few pictures of the people though. People are just the stupidest creatures in the park sometimes. I can't believe how close they got to these elk -- idiots. They did the same thing to the bison. Obviously, they haven't seen the same videos I have showing these animals goring people or tossing them into the air like beach balls. I think I might have a good picture for my caption contest, so I won't include that in the slideshow. I'll try to do that in a day or so. Rick managed to do some fly fishing while we were in the park, so that was fun for him. He's just learning, but seems to be getting the hang of it. The boys and I had a picnic lunch while he fished in the Madison River. He got one bite later in the evening, but it was too small and let go of the line. I had hoped to post more while we were there, but the Internet connection at the RV park was really bad this time around. I hope you enjoy the pictures in the slideshow. I'm looking forward to catching up with everyone's blogs tomorrow after we get done with school. Thanks for reading!