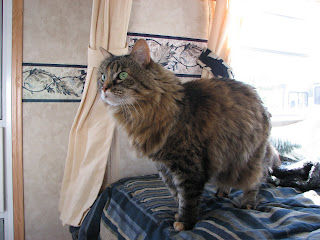 Yesterday during school, Rick called and asked if I wanted to go to Yellowstone for the weekend. We're only 6 hours from the park, so it's cool how we can plan a spur-of-the-moment trip. I didn't hesitate saying yes. However, the girls are our usual petsitters for times like this, but they're both gone. So, to Rick's dismay, I decided to pack up the cats and take them with us. The only other time they've traveled was when we drove from California to Montana. They meowed and carried on, but eventually got used to stopping each day. They quickly learned they could relax when we took them from the van to the trailer. Both Kitty and Belle did really well. They howled for a bit, but eventually calmed down and slept most of the way.
We arrived in West Yellowstone, Montana around 3pm. We haven't done much today, other than walk around town for awhile, eat dinner, and fuss with a very slow Internet connection. This is my second attempt at posting this blog. We have full hook-ups, so at least we don't have to worry about using the battery up and such. Most of Yellowstone National Park is in Wyoming, but a part of it is in Montana, which is the entrance we'll be going through tomorrow. There's a big fire burning, so I don't know how that will affect our plans. However, the fire is only 1200 acres and since Yellowstone covers over 2 million acres, we should be okay.
The only pictures I've taken so far are of the cats. How sad is that. I'm planning on taking more tomorrow once we go into the park. I thought it would be fun to do a caption contest if I get any interesting animal pictures. Kelly Polark recently did that on her blog and I was the chosen winner, so I thought it would be fun to do it here. That is, IF I get an interesting picture. I'm pretty sure I can find a cool prize from one of the Yellowstone giftshops. So, keep an eye out for the contest, providing I get an interesting picture. The really GOOD NEWS is that when I got my computer turned on today, there was an email from NICHELLE! She's doing great in Indonesia. It was so good to hear from her. I'll try to update everyone on her later on, but if you go back to the posts about Nicole and the one introducing the Critter Series, you'll see she was here and left comments. I'm so happy to hear from her and that she's doing well! Anyway, it should be an interesting weekend. So far, the cats are both doing good. Belle isn't used to the smaller litterbox I bought for the trip and just missed the box, so Rick's a little grumpy, but oh well. She's a campin' cat!
Posted by Rena Jones at 7:19 PM