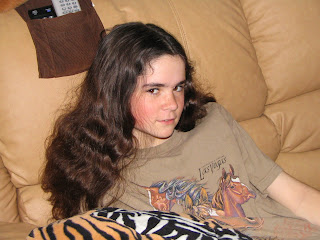 I just wanted to update you on how Nicole is doing. I spoke with her on the phone the other night and she sounded like she was doing really well. She's enjoying college so far, which must be quite a change from being homeschooled from 2nd to 12th grade. However, she sounds like she's making the adjustment well and is enjoying her classes, work, and other activities. Her Internet is limited, so I hear from her mostly by phone or email.
She likes her room, which she shares with two girls, both juniors. They've been a big help to Nicole, showing her around and helping her with things. They're on the 8th floor of their building. I believe the room holds four people, but there's only the three of them this year. One of them is from Texas and when she saw a little photo album I sent to Nicole, she immediately wanted to come to Montana. They both sound like really nice girls. Nicole is enjoying her classes -- she's taking math, English, speech, Bible, and PE. Of all the things she could take for PE, she signed up for ice skating! She's loving it too. The good thing is that it's definitely something she can do when she gets home. She had to give her first speech last week and that went really well. She really likes her speech teacher. Math is the one she likes the least. She mentioned the desks being crammed together and binders poking into everyone's backs. She also said the guy behind her breathes like Darth Vader. Yep, sounds like a typical math class to me.
She is also doing the work assistance program, which helps pay for her tuition. She was assigned to something called dining/special services. She thought it was going to be average kitchen work, but it turns out they get to make cakes and special occasion foods for students and staff members. They also do some outreach work with people in the area. The other day she went off campus for the first time to do an outreach at a nursing home. I didn't get to talk to her about what they did because she had to go to a meeting and our call got cut short. She's excited about coming home for Christmas to see her family and friends, but for the most part, it sounds like things are coming along really well for her. The picture above is pretty old -- taken around 2005, but it's always been one of my favorites. Nicole hates that picture, for some reason, but I love it. Since she's not here and can't access my blog, I figured I could post it without her complaining. We really miss her and are looking forward to seeing her for the Holidays. Still no word on Nichelle, so that's driving us insane, but hopefully we'll hear soon.
Posted by Rena Jones at 7:58 AM