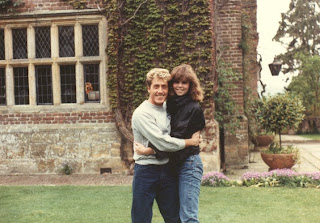 Have you ever met a celebrity? If so, did they live up to your expectations of them? It's funny how people think so high of celebrities, only to meet them and find they aren't what they expect. I haven't met many celebrities, but I have met a few. Some friends & I saw Paul McCartney in a train station in London once. We stopped to say hi and he seemed nice enough. Then one of my friends asked for his autograph and he turned her down. Good thing I wasn't a big fan of his or I would have been crushed. He said he didn't want to cause a scene, but geez, it was London, not Los Angeles. I've heard Johnny Depp is the most willing and friendly when it comes to doing autographs. Good for him, though I'm not real big on autographs.

My one biggest brush with a famous person was with Roger Daltrey of The Who. The picture above was taken in 1984 at Roger's house in England. I spent the whole month of May in England with some friends who loved The Who like I did. We went around seeing the English sights, as well as visiting various places The Who were famous for. We went to Hammersmith, where Roger was born and also where The Who used to play. We went to Brighton where Quadrophenia was filmed. We went to the nightclub The Who played at for the first time. We had friends in England and we made arrangements with Roger's wife Heather to meet him. So, it's not like we crashed his house unexpectedly. He was a gentlemen and showed us around his home, yard and property. I know some little known facts about Roger Daltrey that he was kind enough to share with us. He collects music boxes and used to buy them all over the world when he toured. They're gorgeous pieces with big glass domes over them. He kept them in his billiard room, which is the room behind us in the picture above. He has a small train that runs around the outskirts of his yard that's big enough to ride on. At the time, he had three small lakes that he dug himself and kept stocked with trout. He did have a very expensive car when we were there, but it was parked by his Range Rover. His wife drove a green VW Bug at the time. He was kind to show us around, as well as invite us into his home for tea. It was getting late and he even went to the trouble of driving us to the train station so we wouldn't have to walk in the dark.

I've heard Roger is a grandfather now, or soon will be. He's definitely getting up there in age, but with the recent Who tour, he doesn't seem to be slowing down much. He's also done some work with children's shows recently. I guess he's probably glad he didn't live up to the lyrics when he sang, "hope I die before I get old". I'd love to see The Who in concert one more time, but they aren't touring anywhere near me, nor can I afford the outrageous cost of their tickets. I still love the band and my Who-related trips to England in 1984 and 1985 are wonderful memories for me. Meeting Roger Daltrey as well as Pete Townshend was a fun experience. That was a long time ago and I'm not sure if I'd get as excited about meeting a celebrity now that I'm older. However, I wouldn't mind running into Roger again, just to ask him if he remembers the crazy group of girls who came by his house and had tea with him a few times. Who knows, maybe he's gotten so old he's forgotten us, which might not be such a bad thing either. ;)