Sick as a Dog 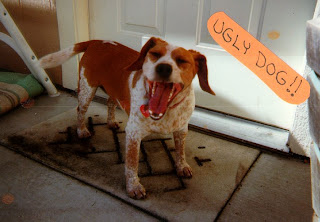 If there was ever an appropriate time to use the term -- sick as a dog -- it was last night. I don't know what the heck happened, but I had an absolute miserable night. Around 9pm I began having muscle spasms in my back. I figured it was from sitting too long with my laptop in the chair in the living room. By 10pm, I was hit with nausea on top of it. To make matters worse, I still had the school schedule to do. What normally takes me 30 minutes, took me over an hour and a half to get done. I finally got to bed close to midnight, but that didn't help. The spasms were getting worse and the muscle relaxer I took wasn't helping. I was up all night long rushing to the bathroom with nausea. I was hoping I would just throw up and feel better, but that didn't happen. Up and down, all night long. And when I was down in bed, the spasms were horrible. I finally fell asleep at 7:30am after I heard my daughter leave for work. The boys were up at 7:45am and by 8:15am, I had to answer a wrong number on the phone. It was literally a night from hell. My husband is out of town, but had he been here, I'm 100% sure I would have asked him to drive me to an urgent care center. I was in that much discomfort.

I finally managed to get going today and now we're taking a short break from school for lunch. I decided to look up the term, sick as a dog, to find the origin. From what I found, the oldest record of that saying goes all the way back to 1705 to show a strong statement of physical unhappiness. It was attached to the word dog because dogs seem to have been linked to things considered unpleasant or undesirable, such as dog tired, go to the dogs and so forth. Yep, that pretty much explains how I felt last night. And finally, I had to put up my Ugly Dog picture. This is Maggie, a beagle we had a few years back. She was actually really cute, but I caught this picture mid-yawn and it's become a little joke at our house, calling her Ugly Dog. It was definitely a sick-as-an-ugly-dog night for me last night -- blecky.