The feeder is hopping! 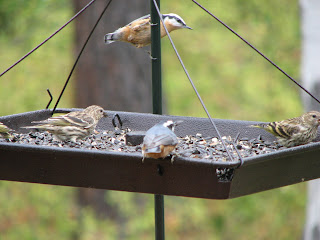 One of the first things I do each morning is put out my bird feeders. I keep them inside at night because of the bears. We haven't had any problems with bears this year, though they still cruise by. I put them out right by my bedroom door. One hangs from the roof and the other hangs from the deck railing. It's always a bundle of energy out there, but today things are really hopping. It's like a little airport with travelers coming in and out. It's common to hear a thunk or even a loud crash when they smash into my windows. Sometimes they bounce right back, but other times it can be fatal. They need to build a little birdie control tower for their flight paths.
I've seen red-breasted nuthatches, black-capped chickadees, mountain chickadees, and house finch. In addition, the chipmunks keep visiting to load up their pouches and then run off to their dens. Right now as I type this, a squirrel has joined the action and is pigging out on the feeder on the railing. If a squirrel is in there, the birds won't go to it because the squirrels will attack them. The chipmunks are more easy going and don't care if a bird tries to get a seed. Not a squirrel -- they don't like sharing at all.
The red-breasted nuthatches are fun to watch because they often land upside down, with their heads facing the ground. They move really quickly, grab a seed, and then fly off. If you click here, you can hear what they sound like. This is a sound I hear all day long at my house. The black-capped chickadees are another popular bird at my feeder. Click here to hear them. I love how they sound. Just like the nuthatches, chickadees won't hang around the feeder to eat. They'll grab one seed and take it elsewhere. I've read they jam the seed into tree bark and then open it that way. Mountain chickadees have a white stripe on their head, which distinguishes them from other chickadees. They have a really cool sound too, if you click here. We also have a lot of house finch here. I haven't seen too many males (they have a lot of red), but I've seen what looks like females and/or chicks. Click here to listen to them. These are noisy birds. They like to sit at the feeder and eat. Another bird I see a lot is the dark-eyed junco. Click here to listen to them. They like to sit at the feeder and eat, but if another bird comes close they chase it away. They must have learned from the squirrels.
Speaking of squirrels -- she's still in my feeder, stuffing her face. The chipmunks take the seeds to their den because they hibernate in the winter. The squirrels will be out all winter long, so they just sit and eat. The baby finches have resorted to finding what they can on the railing below the squirrel. Never mind the fact that the entire deck is covered with seeds that have been scattered. There was just a scuffle between two squirrels and things went flying. As I look now, the squirrel has hopped off and has been replaced with SIX house finch. The other birds are coming by to grab a seed and leave. And, I can hear the squirrel scolding them from the distance. It's never a dull moment around here.
Posted by Rena Jones at 9:43 AM