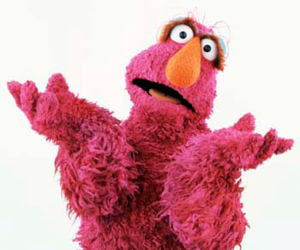 I use these calendar pages for school that list fun, unofficial holidays. The boys get a kick out of them. Today is Telly Monster's birthday. I mentioned it to the boys and they couldn't remember Telly. Then I realized they didn't watch Sesame Street that much. The girls watched it and I watched it, but not the boys as much. By the time they were born, we were into homeschooling, so maybe that's why they didn't see the show as often. That's not to say they didn't watch it at all because they did. There was a time they were really into the Elmo's World and we had a big collection of Sesame Street videos. Today is Telly Monster's birthday. He made his debut on Sesame Street in 1979, so he is 30 years old today. Here are some facts about Telly ...
His first name was The Television Monster
Telly, as his name was shortened to, was obsessed with TV
He originally had a TV antennae sticking out of his head
When Telly watched TV, his eyes would whirl around
Telly enjoys playing the tuba
He's known for worrying, paranoia, and fidgeting
Telly loves triangles
He has a hamster named Chuckie Sue
Telly enjoys bouncing around on his pogo stick
Telly's best friend is Baby Bear
So, there you have it. Happy 30th birthday to Telly Monster! Whether you're into Sesame Street and/or the Muppets or not, today seems like a good day to celebrate! Have some cake and party like a big, red monster!
Posted by Rena Jones at 11:34 AM