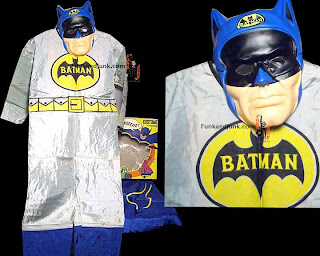 My youngest, Neil, has a love/hate relationship with Halloween. He claims it's his favorite holiday because he loves dressing up, carving pumpkins, and getting candy. Nevermind the fact that he eats only 1-2% of what he actually collects. At the same time, he hates Halloween because it's scary. Trying to take him shopping this time of year is hell. He wants to peek at the Halloween decorations in the store, but he won't go near them. I can't even get him to skip the scary stuff and go look in the candy aisle. He hates it and I've had to literally drag him to get him past some displays.
We've been getting a lot of Halloween related catalogs in the mail lately. Most are from companies like Oriental Trading or Party Express, and they all have special Halloween issues. Neil loves these, even though there are some scary looking costumes and decorations in them. He's taken to collecting them all and will sit and look through them for a long time. I don't understand it, but maybe it's therapeutic for him. Most of the catalogs aren't that bad. A few days ago we got one that's kind of out there. I opened it up and the first half of it were adult costumes. I'm not talking your average adult Halloween costumes. These are the ones you'd expect to see in a Fredrick's of Hollywood catalog. They're suggestive, but there's no nudity or anything, so I went ahead and let him look through it. Fortunately, Neil is 7 and skipped through all the adult stuff and went right to the kid's costumes.
However, even the kid's costumes are getting way suggestive, especially for little girls. It used to be the sexy costumes were for adults, but they quickly marketed them for teens. Now it seems they're marketing them for even the youngest kids. I don't know about you, but I wouldn't let my girls dress up in some of these costumes. Too many weirdos venture out on Halloween night, thinking they can get away with anything. It always blows me away to see a couple of preteen girls out trick-or-treating by themselves dressed in these adult-fantasy outfits. It's one thing to dress up as Little Bo Peep -- but it's another thing to wear platform shoes and thigh-high stockings. That's fine for adults, but in my opinion, it's too much for little girls, even preteens.
Sometimes I feel like my grandma saying things like, "When I was your age ..." I do think some of the adult costumes are cute, but I don't like the idea that they're marketed to little girls. When I was a kid, we had a dime store called TG&Y. It was like a Woolworths, or a Ben Franklin, or maybe even a Walgreens without a pharmacy. You could find just about anything at TG&Y. As kids, we'd go there to buy candy. Halloween was an exciting time at that store because they'd set up a huge display. At least it seemed huge to us. This was before the big box stores. I remember walking up and down all of the aisles looking at the Halloween stuff. There weren't all the decorations you find today. If someone took the time to decorate their house, they usually made their decorations by hand.
One thing I remember vividly were Halloween costumes. TG&Y had boxed Halloween costumes. Unless you trick-or-treated in the 1970s, you probably don't remember these. You had 2 choices for costumes back then. One, you could make your own or have your mom make one. Or two, you bought a boxed costume. By boxed, I mean the costumes were sold in literal boxes, like the picture above. There was a plastic mask of the character and then a vinyl-like cover-up of the character's body. The cover-up tied at the back, like a hospital gown, so you had to wear regular clothes under it. The masks were hot and the elastic bands always got stuck in your hair. But as kids, we loved these costumes. I'd search every box until I found a character I liked. However, I didn't always choose a boxed costume. A lot of times I'd settle for a black witch's hat or maybe some cat ears. It was up to me to get a black leotard and black tights for the rest of the ensemble. I remember sewing a cat's tail myself a few times.
Back in the 70s, Halloween wasn't about how great your costume was. It was just about getting as much candy as possible. We didn't have aisles and aisles of trademarked costumes to choose from, in every size imaginable. Boxed costumes came in one-size-fits-all. The sexy costumes were never seen, unless you had access to a Fredrick's of Hollywood catalog. There were no costumes that lit up, or used electronic devices to inflate them. We didn't have special Halloween stores pop up during the month of October. We waited for TG&Y to set up their huge display, which was probably an aisle or two, if that. As a kid, I always thought it was funny how Sally says, "Tricks or treats" in the cartoon, It's The Great Pumpkin Charlie Brown. Now, I'm wondering if she was onto something ...