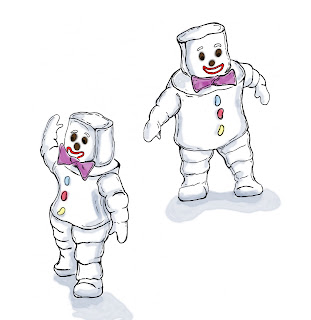 THE MARSHMALLOW MAN!
Run, run, run, as fast as you can, you can't catch me ...
I'm the marshmallow man!
I'm happy to introduce my upcoming book, THE MARSHMALLOW MAN. It's a silly new twist to a classic old story. Follow the little old lady and all her hungry friends through the forest as they chase the mouth-watering man made from marshmallows. Will it end like all the others?
I was inspired to write this last year after the boys and I finished a week long study of The Gingerbread Man. Over the week we read 5 different versions of the story, including The Gingerbread Boy, The Gingerbread Baby and The Cajun Gingerbread Man. The boys compared the stories and did some fun projects to go with it. At the end of the week they made their own gingerbread men cookies. This got us talking about other versions and THE MARSHMALLOW MAN was born!
Stephen Macquignon is illustrating the story and he's given me permission to show you his first sketch of the little guy. Isn't he absolutely adorable? Stephen is a wonderful illustrator who has just recently finished another book called Angeline Jellybean, written by Crystalee Calderwood. It should be released soon, so I hope to have a review shortly. Stephen did a fantastic job illustrating it, so I was thrilled to have him bring THE MARSHMALLOW MAN to life. This book will not be out until late 2009 or 2010, but I couldn't wait to share it with you. It will be published by 4RV Publishing, LLC.
Run, run, run, as fast as you can, you can't catch him ...
he's THE MARSHMALLOW MAN!
Posted by Rena Jones at 8:00 AM