Critters of the Sea 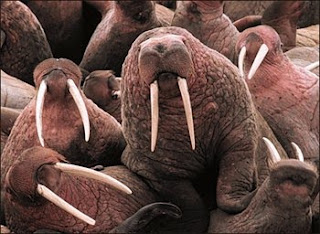 Remember that picture book I mentioned yesterday? Well, I spent most of the afternoon working on the first draft. It's a short one, less than 250 words. I have another one similar that's out as an exclusive submission. I've submitted the first one before, but a long time ago. Anyway, I thought it would be fun do do another, so I did that yesterday. It's about sea animals and in the process of my brief research, I found some pretty interesting stuff. Here are some things that stood out ...

Octopuses have 3 hearts. They're also highly intelligent and can distinguish shapes and patterns. They don't live very long, averaging 6 months to 5 years. The males die a few months after mating and the females die after their eggs are hatched.

The average seahorse has 100-200 babies, but some larger ones can have up to 1500. Less than 5 out of every 1000 survive to become adults. And as most know, the males carry their young in their pouch, not the females.

Both male and female walruses have tusks and they can be over 3 feet long. Besides, their tusks, they have few other teeth. Walruses have no external ears and the whiskers on their face is called vibrissae. They have 400-700 vibrissae that can reach up to 12 inches in length. Walruses only have 2 predators -- the orca and polar bear.

Sea otters are able to live their entire lives without ever leaving the water. They have the most dense fur of any animal. There are nearly a million strands of hair for every square inch on their body. They are also one of the few mammals to use tools, such as rocks, to open shellfish.

A few other interesting ones -- Electric eels are not true eels, but fish. King crabs are not true crabs. A clam has no head or eyes, but has a heart, kidneys, and a mouth. Jellyfish and starfish don't have brains. I guess that's why they made Patrick so dumb on SpongeBob.

Anyway, some of these things were pretty interesting, so I thought I'd share. You might have heard them all before. At least the first draft of my book is done, so that's one good thing. Now maybe I can get the first book published and this could follow it. I can hope anyway!