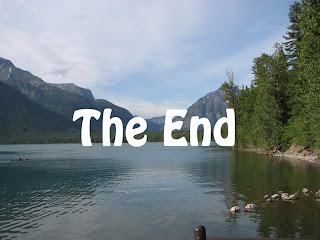 I suppose these could be two words many writers look forward to writing the most. I got to write them last night when I finished a middle grade novel I've been working on. I started it January 29th, so that was about two weeks ago. I've worked on it off and on and according to the document info, I've revised it eight times. Of course, it's still a rough draft and I'm sure it will see many more revisions. For the most part, it's done.
I've only written one other MG story, which is still unpublished. That one is short at 11,070-words and geared towards kids who are starting to get into chapter books. The one I finished last night ended at 30,430-words. That's 17,000 more words than I originally set my goal on. I'm inexperienced at writing novels, but one thing is for sure, there's a feeling you get when you finish one. It's a funny feeling of accomplishment or a sense of closure. It's hard to explain. I felt it with my first MG too. I don't feel it when I write picture books, even though they end the same way as any other story.
Just like every writer, I have a few concerns. One is the use of brand names. I searched on Verla Kay's message board and the impression I got was to go ahead and use the names and let the publisher decide. Another concern is the time period the story takes place. It's one of those things where I don't know if it would be considered too outdated for today's readers, or more on a more positive note, fun for them to revisit history. I'm not trying to knock the story down before it even gets a chance, but they are still concerns.
Now comes the hard part -- the synopsis and blurb. I did a synopsis for my first novel without much struggle. The blurb is harder for me. The synopsis basically tells what the book is about from start to finish. The blurb just gives a short summary, using only a few sentences. That's the part I struggle with the most, even with picture books. I'm at that point now because if someone were to ask me what the story was about, I'd stutter and stammer trying to explain it. I need a blurb! However, I do have a title finally and ironically, it's nothing close to what I originally had in mind. The title is going to be -- Bananas Don't Dance. Anyway, the majority of the story is finished, even though I still have lots of work to do. Regardless, it's a good feeling when you write those two little words at the end.
Happy Valentine's Day, also. Today is our 22nd wedding anniversary. Rick and I were married in 1988. Later tonight we're going into our little town of Bigfork to the playhouse and watch an Elvis impersonator. His name is Ryan Pelton and you can visit his website here. It should be a fun way to spend our anniversary. I've seen the real Elvis in concert though, so I'm always way too skeptical when it comes to watching impersonators. I'll probably post about his show tomorrow and let you know what I think. I hope you all have a wonderful Valentine's Day!
Posted by Rena Jones at 9:39 AM