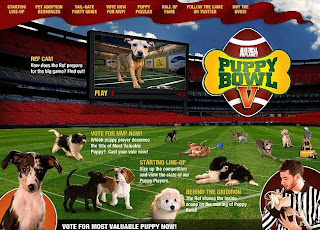 Yes, folks, it's that time of year again! It's time to get out the milkbones and chewtoys! Puppy Bowl VI airs tomorrow afternoon on Animal Planet. And, if you happen to miss it -- don't worry because they replay it all day long. I watched this for the first time last year and it's really cute. Maybe a little slow at times, but it's cute, all the same. The first showing is 3pm.
The featured puppies are from animal shelters and they make a point to encourage viewers to adopt from local shelters. They play football in a little stadium and just like the big guys, they often get put in time-out (usually for piddling on the floor) and suffer penalties. Last year there was a tail-gate party just outside of the stadium, with puppy fans cheering their teams on. Of course, I'm a little partial to the half-time show where the kitties come out and play for awhile. This year the show will also feature bouncy rabbit cheerleaders and a hamster crew taking aerial shots from a blimp.
I'm cheering for Tator Tot, the beagle. Hey, I'm telling you -- YOU DON'T WANT TO MISS THIS! These are the most adorable puppies you will ever see. They make the ladies of the Lingerie Bowl look like a bunch of old dogs!
Posted by Rena Jones at 8:26 AM