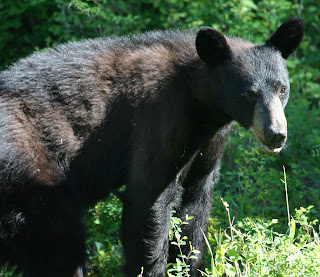 I had another dream about bears early this morning. I'm starting to hate those. You would think I'd have a nice dream about Elvis or something, but no -- bears. And they're never cute, cuddly teddy bears either. Maybe I should listen to Elvis sing, "I just wanna be your teddy bear!" before bed. The bears in my dreams are always trying to get into the building I'm in. The doors never lock and the windows never close right. It's always the same.
This time I was in a building with the boys and there were bears all over outside. We were trying to get the doors shut. I look out a window and see a man hammering a sign into the ground saying he had killed three bears so far. There was more writing on the sign, but I didn't get to finish reading. Right as I was trying to read it, a large bear cub was trying to break its way through my door. I pushed on the bear's nose, but it was too strong for me, so I picked it up by the scruff of the neck and hurled it. Not a good move. Out of nowhere, this HUGE mama bear shows up. She was not happy. Next thing I know, the man with the sign hops down with a rolled up newspaper. He's holding it in one hand and tapping it onto his other hand, kind of like a baseball bat. It was almost like he was saying, "C'mon, you wanna piece of me?" Again, not a good move. The next thing I remember was the bear approaching him and then suddenly Jack Hanna is with him. The bear is just about to go for Jack's throat ... and then ... I woke up.
Man, I hate those dreams. There was an earlier part where one of the bears actually bit me and I remember feeling teeth on my hand. It had to have been a cub. The teeth were sharp, like a puppy, but 100 times worse. Crazy stuff. I dream about bears a lot. We have bears in our neighborhood. We didn't have any problems with them this past summer -- not like we did the year before, but they were still around. I have also read my share of bear attack books, which I'm sure doesn't help. It's kind of funny though. Out of all the picture books I've written, I don't have any about bears. Ironic, huh?
Rats must be less threatening. I never have bad dreams about rats. Thanks to everyone who voted for A New Job for Dilly in the Preditors & Editors Readers Polls. Dilly has managed to squeak his way up to the #4 spot again. I hope he can get even higher, but the polls are only open 4 more days until Janaury 14th. If you haven't voted, there's still time. Click here to cast your vote, and thanks again to everyone who has done so. Go Dilly, go Dilly!
Posted by Rena Jones at 9:44 AM