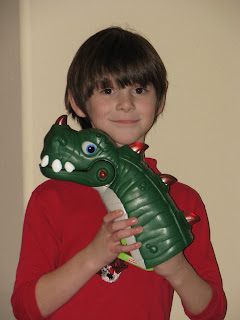 We took the entire family shopping yesterday afternoon. Everyone had giftcards burning holes in their pockets, so they were anxious to spend them. I didn't spend all of mine, but that was mostly because I was acting as a human calculator for the boys. "How much do I have left?" I did get a new pillow and the Tim Burton film "9", so that was cool. Nathan surprised me by wanting to save the last $10 of his Target card for a later time. Then at Borders he picked out a field study guide on insects and a movie he's been wanting. Neil was pretty thrifty too and found a pirate toy at Borders that was 50% off. He also got 3 Berenstain Bears books to add to his collection.
Another thing Neil picked out was the toy in the picture above. Has anyone seen those huge dinosaur toys by Fisher-Price/Imaginext? It's called Spike the ULTRA Dinosaur. Neil has been wanting that thing forever. He even put it on his Santa list, but didn't (gasp) get it. He didn't seem to mind too much, because he knows it's really expensive. I think that thing is over $100. It's huge though and stomps around. Well, to Neil's delight, he found the above toy last night. It's basically just Spike's head. It growls, burps, chews on a bone, lights up, and so forth. It's sort of like a puppet. As soon as Neil saw it, he knew that's what he wanted to spend his money on. Nicole cracked me up when she said maybe they'll come out with the rest of the body parts one at a time. Neil already has the mini version of Spike Junior, but he was thrilled when he saw this head toy. I heard some commotion in the car on the way home, followed by, "Spike did it!" Yep, I'm sure Spike will be quite the troublemaker in this household -- even if it's just his head.
Posted by Rena Jones at 11:44 AM