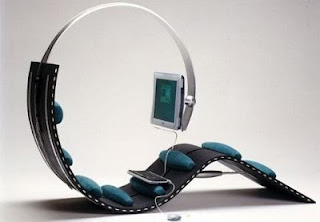 How much of your day is spent sitting? Think about it. You sit to eat your meals, to watch television, to work on the computer, to do crafts, even to read. There are other things you sit for like going to the dentist, waiting for your doctor, driving your car, getting a haircut, and so on. This doesn't even include most people's employment and how much they sit at work. One thing is for sure -- we spend way too much time on our butts!
Yesterday I read an article called Sitting Too Much Can Be Deadly. I never thought of it that way. I do know a sedentary lifestyle isn't healthy, but can it really be deadly? Studies show that people who sit for a long time might not only be overweight, but could also have a heart attack because the genes that regulate fat and glucose shut down after long periods of sitting. Regular exercise helps, but the studies show it would be more beneficial to exercise throughout the day rather than in one bout.
Which brings me to another article called If Your Kids Are Awake, They're Probably Online. Check that one out. It says that kids ages 8 to 18 spend an average of 7.5 hours a day using some sort of electronic device. And that doesn't include the 1.5 hours many kids text or the half hour they actually talk on the phone. Computers, phones, video games, televisions -- the list is staggering. The study in this article goes on to say that kids who spent the most time using electronic gadgets were more likely to complain of boredom, sadness, not getting along with parents, and doing poorly in school.
If we sit a lot as adults, technology has advanced so much that it's even worse for our children. What are they going to be like when they're adults? Will they be like me -- up at 2am, sitting hunched in a chair, blogging? And why am I up? My back hurts and I can't sleep because of it. Why? I sit too much. So, I'm going to think twice next time Nathan wants to balance on his tippy toes in his chair doing his history, or when Neil gets frustrated because he can't concentrate and wants to lay under the table to do his math. If they want to stand on one leg to read, fine! Sitting is overrated.
Posted by Rena Jones at 1:44 AM