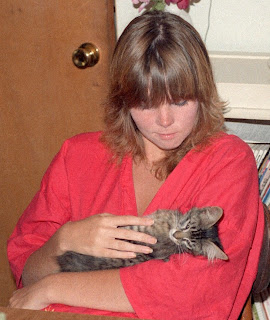 There was just something about this cat. I miss CJ so much. Not a day goes by that I don't think about him. It's hard not to with his pictures everywhere. He just had something special about him. Maybe it was the way he meowed when he walked into the room. It was like he was saying, "Hi guys! Here I am!" Maybe it was the way he'd lie on my chest, push his nose into my throat, and knead my hair into a tangled mess. Maybe it was how he was always by my side. Maybe it was all of those. All I know is that I miss him.
Rick and I found CJ by a brick wall near my house one day. We were coming home from school when I heard this slight mew sound. He was a tiny ball of fluff. There were rumors that a man had been seen dropping kittens off in the area, so I'm sure that's where he came from. He was barely weaned and wasn't interested in eating much that first day. All he wanted to do was sleep in my arms. This picture above was taken later when he had gotten a bit bigger. He continued to sleep in my arms like this all his life. After my kids came along, I always referred to him as my first baby. He was treated just like one of the kids. I mean, really -- just look at that face!
CJ had an interesting life -- from being abandoned as a kitten, to getting hit by a car and needing extensive surgery, to digging up his ashes so I could move him to Montana. I've often wanted to write a book about him. In fact, two years ago I did write one for my NaNoWriMo project. There's over 50,000 words written down about my little cat. It would be awesome to revise it into something worth publishing. I just don't know how well that would do. I see books written about people's pets all the time, but I'm not sure if it's something a publisher would want to work with. However, CJ touched so many people, not just my own. He is truly missed by many.
Posted by Rena Jones at 10:12 AM