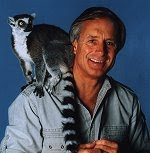 Today is Jack Hanna's 63rd birthday. I've always liked him. I grew up watching Jack on his Animal Adventures shows as well as the Tonight Show and others. There is just something about him that I have always liked. Maybe it's the way he lets animals crawl all over him. I still laugh when I see the clip of the camel licking his head and making his hair stand up all gooey. Here are a few interesting facts about Jack Hanna ...
What a lot of people don't know is that Jack Hanna owns a home right here where I live. I live in the town of Bigfork and just down the road is a small town called Wood's Bay. Somewhere in between the two places (less than 10 minutes apart) is Jack Hanna's ranch. He's here quite often, but I have yet to run into him. It's believed he will retire here soon, so hopefully I will catch a glimpse of him one of these days. And how cool is this picture above? I just had to post this one since my new picture book is out now -- Lemur Troops & Critter Groups. Who knows, maybe I'll run into Jack one of these days and give him a copy!
Posted by Rena Jones at 10:44 AM