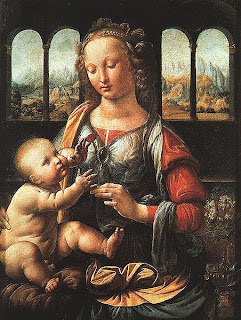 The boys and I have been doing a study -- more of an introduction -- to Leonardo da Vinci. I have a great book called Leonardo da Vinci for Kids that features the story of his life, his ideas, and twenty-one projects to do. It includes simple projects, from sketching a horse or painting a bird, to making a kite or growing a herb garden. My girls worked through the book when they were younger, so it's fun to go back and do it again with the boys.
One thing that we've all found sad is Leonardo's family life. His parents never married. He was sent to live at his father's farm when he was two, but his father was rarely home. He was raised mostly by his grandfather and uncle. He often walked by his mother's home. She had married and had more children, which made Leonardo feel sad and left out. When he was fourteen, he was sent away to work as an apprentice for Verrocchio, where he was exposed to the training and skills he'd become so famous for later in life. Leonardo's life was complex and controversial for some people, but I keep it simple for the boys. They can study him futher as they get older.
There are many of Leonardo's paintings that I love, but The Last Supper and the Mona Lisa obviously stand out. Though he is said to not have any close relationships with women, he painted so many of them. The one pictured above, Madonna and the Carnation, is on the cover of the book we use for school. It's interesting how so many of his paintings feature women and children, without any father figures around. Not surprising, considering his upbringing. I can definitely relate to that, come to think of it.
Do you have a favorite Leonardo da Vinci painting?
Posted by Rena Jones at 9:08 AM