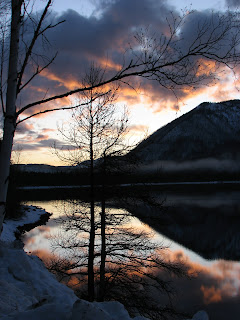 I took this picture yesterday inside Glacier National Park. This is the southern end of Lake McDonald. As we were leaving, the clouds began to clear away and there was an amazing sunset. The water was like glass and looked like a gigantic mirror at times. We went snowshoeing for a few hours and walked along the lake. Even though it was cloudy most of the time, the views were spectacular. We saw an otter cruising around, a raven, some grebes, and a few squirrels. There were people in the park, but we didn't cross paths with anyone while we were walking around. We went with a friend of Rick's from work named Blaise. The boys had fun snowshoeing with her little girl, who I think is the same age as Nathan.
There's a funny story about Blaise. When we first moved to Montana, Rick had moved us up here, but had to return to California to finish work. The boys and I took him to the airport and then we proceeded to drive home. As I was pulling out of the airport, our van stopped right in the middle of the highway. There were cars zooming by both sides going 70+mph. The van was dead and I didn't even have time to get it pulled to the side of the road. I called Rick's cell, but he had turned it off. He was going through security and figured he wouldn't need it. I was trying not to panic, which was hard with cars zooming by and two scared little boys in the back. I called 911 and being new to the area, I was lucky I even knew my new phone number, more or less where I was and what direction I was facing. A policeman arrived and parked behind me so no one would run into us while we waited for the tow truck. In the meantime, I called the airport to see if they could page Rick. As I was talking to someone, they were writing down Rick's name when I hear someone say, "Rick Jones? That's me." Rick was going through TSA when the message came in. Blaise was working for TSA and was talking to Rick at the exact time. Ironically, Blaise later came to work for the Department of Corrections in the same office as Rick. Talk about a small world, huh?
Posted by Rena Jones at 10:03 AM